You Are Here: Home » Music » ALBUM REVIEW: THE INFINITE THREE – SONGS OF THE BREATHER

ALBUM REVIEW: THE INFINITE THREE – SONGS OF THE BREATHER

After a summer of chaotic live shows in 2013, the London-based trio, consisting of Daniel Knowler (Voice, guitar and sampler), Sam McLaughlin (Bass guitar) and Paul Middleton (Drums ) have been creating and now are able to showcase their new songs for their second album Songs of the Breather.

With Daniel Knowler working with Sam in the United Kingdom project and Paul in the recent live line-up of the experimental music project Cindytalk, it feels like the trio have been able to come together and work very well.

Starting off the album, the first song is Mother Iron, which gets straight into your face, with the repeating guitar riffs and starts off the album very strongly, which I think sounds like a little bit like an early track from The Killers.

Second on the album is Bone Star, with it being released last year as a single, Bone Star starts to brings the album into a much more dystopian psychedelic sense.

His Body follows with a much more experimental feel to it, with it adding loads more off beat sounds and dub effects than in comparison with the previous two songs, allowing you to actually see what the band are aiming to do.

Just under halfway throughout the album, I think is the strongest and the most commercially applicable sounding song Sharpy sounds like a blend of old-school Hard-Fi and The Black Keys, which in my opinion sounds really well put together, being my favourite song on the album.

Past half-way through the album, Light (Vertigo #2) is a really eerie sounding instrumental track, sounding like it’s a scene from a 90’s sci-fi movie.

The sixth track on the album is The Tongue, which again, is very psychedelic with the majority of the song being repeated over and over.

New Skin Breathers is another track with no vocals, but this time is it a lot more experimental, with it being entirely different to everything else on the album.

In regards of the previous song, Febrile (The Eggs) is completely different, with being an actual structure and the end of the song (With what I am assuming are zill finger cymbals) blends nicely into the last track on the album.

Overall, I think this album is very different, with most songs sounding completely different to the one before, as well as the song after. The Infinite Three will be playing a very special album launch gig on Friday the 30th of May at Surya, London. Tickets can be found here. Songs of the Breather is on sale now, so be sure to check it out!

You can order a really cool looking translucent green cassette on their website here, meaning that no matter how old your car may be, the lads from London have made sure that you are still able to listen to this album! 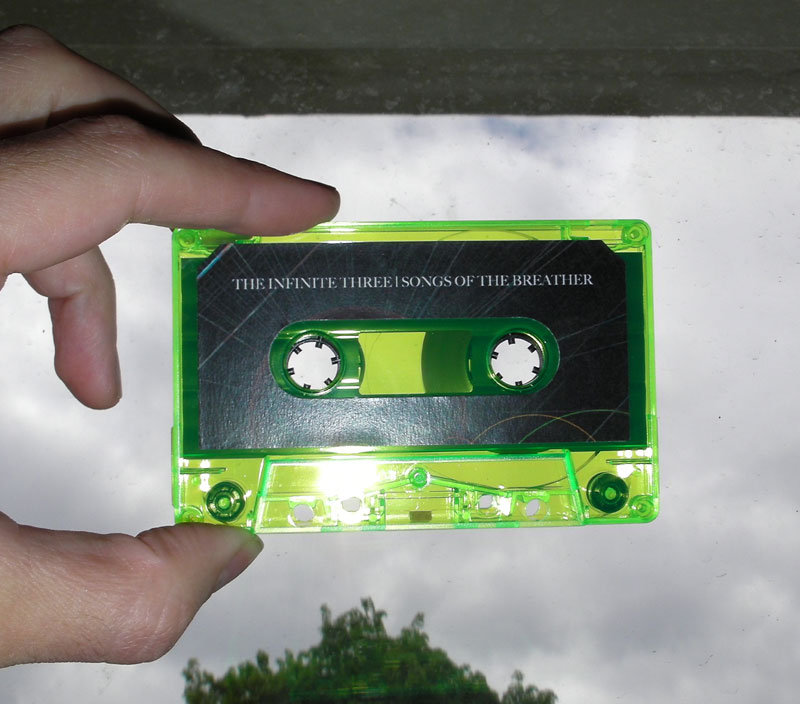 You can also find the band by visiting their:

21-year-old third year Computer Science student at the University of Hertfordshire that often gets mistaken for the Milkybar kid.